Thursday Thirteen: 13 Reasons for my Game of Thrones Obsession 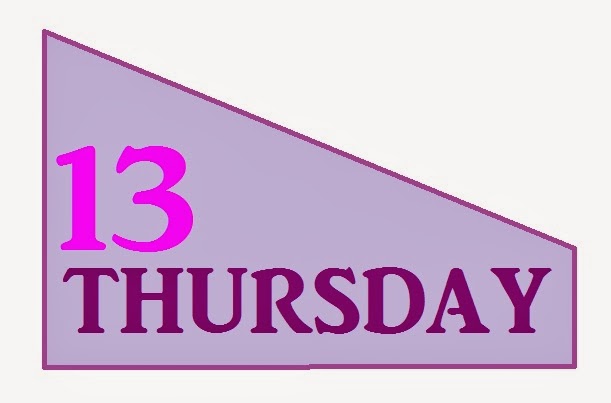 Welcome to my Thursday-13! The Thursday-13 is a weekly meme with a simple theme: each Thursday you blog a list of 13 things. What kind of things? Any kind! Just come up with a list theme and run with it.

So, I just recently started watching Game of Thrones, the hit show on HBO. I didn't think I'd like it, because though I'm a SFF fan in general, I don't like everything. It's a tossup between what will bore me and what will enthrall me.

So I watched episode 1. And then episode 2. And then my husband and I got into it together, and we're halfway through season 3 at the moment. I'm in love with the stories, the characters, and the sheer emotional torture that is this show. I'm sure at some point I'll also read the books, but that'll come later.

So, why am I so obsessed now? Here you go, from the general to the specific. Beware, if you haven't seen it, SPOILERS further down the list!

1. The characters - All of the characters are so multifaceted and complicated, it makes my heart jump every time I find out something new.

2. The worldbuilding - Because, oh my goodness. The lands, the peoples, the cultures. They're so rich and textured, and I like that I can see them on a map. The weather, flora, fauna, and even just the landscape have become fascinating. The peoples and their culture, from the Dothraki to the Kingdom folk to the Wildlings, it's all intense and detailed.

3. The politics - What's an AU historical fantasy novel without some good politics? The rich, the poor, the royal, the common, the whores and the queens. The politics are insanely complex, and that's what I enjoy the most about them. It's a brutal chess game.

4. The emotional masochism - Because I can't 'ship any-damn-body without having AT LEAST one of the people die, if not both. Yet still, I watch, and I hope, and I dream. And I have fanfiction, when all else fails.

5. The dialogue - Oh my. The dialogue is genius, pure genius. Some of it is very subtle, and others of it are just brutal, but it's all entertaining.

6. The relationships - The relationships in these stories are intense and wrong and right and just fantastic. Between the twincest of Cersei/Jaime, the abiding love of Ned/Cat, the forced marriage of Daenerys/Khal, and even the pretend!love/real!hate between Joffrey and Sansa...and those are just the primary ones! The secondary relationships, the sheer chemistry between some characters who don't often meet each other, such as The Hound and Sansa, is amazing.

Onto the specific characters/relationships that have and will keep me obsessed:

7. Daenerys/Khal - I like both of these characters, and how they caused each other to grow. An arranged marriage, Daenerys had little power to begin with, but it grew inside of her by leaps and bounds. Khal was rough, brutal, and has his relationship with her deepened, that brutality was tempered, at least when he was with Daenerys. Other folks watch out though *coughViceryscough* Moon of my life...my sun and stars.

8. Tyrion Lannister - Tyrion is amazing. Just awesome, and funny. He's probably the most sarcastic character on the show, and his lines tend to have me in stitches. At the same time, he's also got the most...humanity, I suppose, of those in the highest positions/family in that Kingdom. He's so often brash and funny, but these glimpses of vulnerability that we get just bring me to a deeper love for this character.

9. Sansa Stark - Oh, the little dove. Sansa is everything a proper lady should be. Her desires are to marry, have children, and be a good wife. When the series starts out, she's so naive (not just young, but really naive), and all she wants is to marry the prince and bear his babies, the future princes and princesses of the realm. As the series goes on, and she's exposed to brutal reality, far away from her sheltered life in Winterfell, she grows this spine that's amazing to see. She remains proper, and wears a decent mask for the political world, but she seems to be growing some of her own plans. She has some growing to do yet, but I really like her character.

10. Arya Stark - Arya is a character I adore. She's got spunk, smarts, and is just a bit of a revenge-hound, but that works for her (and for me, watching her). She's hilarious, and really is as naive as her sister, but in her own way. She believes in this revenge/justice hybrid, but has a loyal streak a mile wide. She is a warrior in her own right, and would rather be a warrior than a lady. She's wicked smart, and I enjoy her interactions with other characters, especially those like the Lannister patriarch, Tywin, and the bastard blacksmith Gendry.

11. Cersei/Jaime - Ah, the twincest. I enjoy consensual twincest, when done right. This is definitely done right, though it's more like two tiger sharks who'd allowed each other to survive the birthing process. Cersei is vicious, her love this weird, twisted thing, whether for her brother or her children. The fact that she's brilliant, under appreciated, and was essentially sold into marriage to Robert, seems to have created this monster who will do anything to keep what power she can grab. Now, as for Jaime, he's very cavalier. Nothing appears to bother him, not even his nickname of Kingslayer, and he goes through life bandying about his father's name in order to get out of what trouble he can't remove himself from. However, as the show goes on, especially in Season 3, you find out more about him beyond the cavalier surface, to the  man inside.

12. Theon Greyjoy - He annoys me. Yes, he's a reason for my obsession, but he annoys the ever living hell out of me with his wishy-washy decisions. He loves, he hates, the fact that he worships a water deity does NOT surprise me, as he is as dependable as the ocean in a storm, that is to say, not at all. But he's a fascinating character all the same, and many things happen to him. I wonder where he's headed, and that keeps me enthralled.

13. Brienne of Tarth - As I'm only halfway through season 3, I'm only just getting to know Brienne. She's strong, stocky, and quite masculine in most of her mannerisms. She's a warrior more than a woman, and would be the first to admit it. Her loyalty, ethics, and problem solving skills are fascinating in this world where many are only as loyal as you can pay them to be.
Posted by Unknown at 11:42 AM

I'm a big fan, too, but have watched all the way through the current season and am awaiting Sunday's new show, so I won't comment more lest I spoil something.

*grins* There are certain things I already know (Red Wedding, Joffrey, etc.) as they were so shocking/exciting that I couldn't avoid finding out.

Yay for fellow fans! I adore this show, and can't wait to be all caught up!