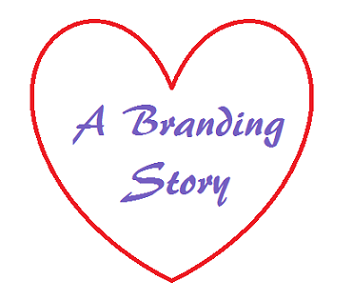 I wear my husband, MDR's, brand now, and a very good friend of ours Master O. (and his slave d.) helped make that happen. It began in June of 2013. On FetLife, a group posting let us know that there would be a branding demo in one of our local dungeons. I expressed excitement about that, and our friend posed the option of me being one of the demo bottoms for their presentation on branding. After some conversation, MDR and I agreed that it was a great idea. We even had a design for it!

I made several posts on FetLife going up to the day of the branding. I was so excited, and SO nervous! I mean, I knew the basics of what would happen, but there's no real way to prepare for the sensory experience of someone burning a mark into your skin for the first time.


The night of the branding, we got to the dungeon where the demo would take place. A few friends of ours showed up specifically to support this new step, but we knew most of the folks there already.

We went first. The other demo bottoms were getting brands that meant something to them, but mine was the only mark specifically to denote my position, the mark of my ownership. The first step: apply the stencil. This was the painless part. They schmeared some stuff onto my right calf, placed the paper over it, rubbed, and pulled it away. Voila! Instant stencil, ready to be applied.

The mark is very special to us. MDR called me his butterfly from almost the get-go, and we both saw butterflies as a sign of good luck, transformation, and beauty. It also has his initials hidden in the design: the M on the left, the D top right, and the R bottom right.

After the stencil, I lay down on the flat leather table. My friend a. stood on my left and held my hand. Slave d. stood on my right and held that hand. MDR stayed at the end of the table, his hand on my foot, his gaze on mine. Master O. held the cautery pen, which is the method we used given the design.

The first touch sizzled before I even felt the pain. There was definitely pain, but it was so concentrated that it was unlike anything I'd ever felt before. Bright and searing, and the intensity rose as the pen moved over the stencil. I took deep, measured breaths through the pain, savoring the hot pinch of the pen as it kept going. I winced anytime they hit a particularly sensitive area. I squeezed the hands which held me, locked my eyes on MDR, and just kept breathing until they finished. Oh, and I do mean 'they' finished. 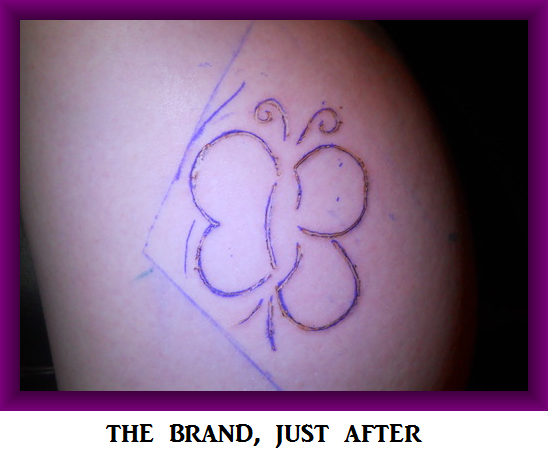 It didn't take long, and Master O. got to the 3/4 mark, but let MDR put the last bit of the mark on. Since it's an ownership mark, he wanted to make sure my Owner got the chance to be part of putting the mark on me.

When all was said and done, this is what it looked like just after the branding. It hurt, but I was high as could be on endorphins, and the sheer pleasure that came from finally having a permanent mark from my Man.

It did take a few weeks to heal completely, and in that time, I had to keep it very clean. I also had to remember it was there, because when I sat at a table, I sometimes moved my legs and got a painful surprise.

First it was tender, then it was itchy. However, since the whole point of the brand is to make a scar, peeling the scabs and scratching it (or rubbing it with a rough washcloth in the bath) is recommended. I also doused it in saltwater. Ouch! That was probably worse than the pain from the brand itself.

Here is the progression of healing, as it was just after, and then several months later. The ones at 7 and 9 months are a little harder to see (sorry!) because by then we'd stopped taking close-ups of the brand itself. However, I do find myself hoping that we'll get it retouched soon, perhaps even on the anniversary of the brand itself. Time will tell! 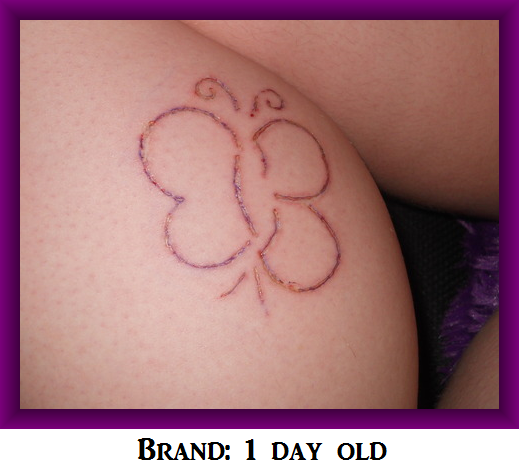 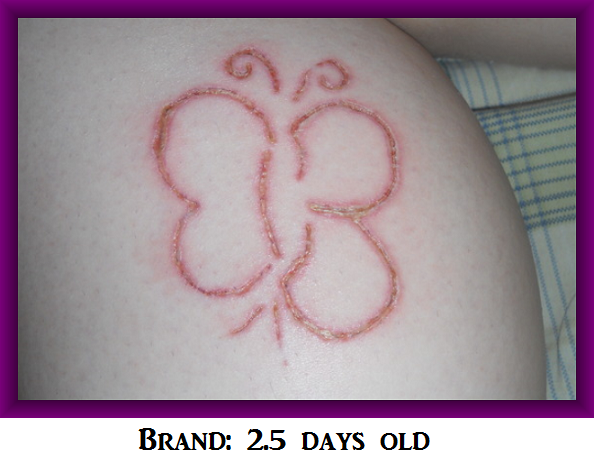 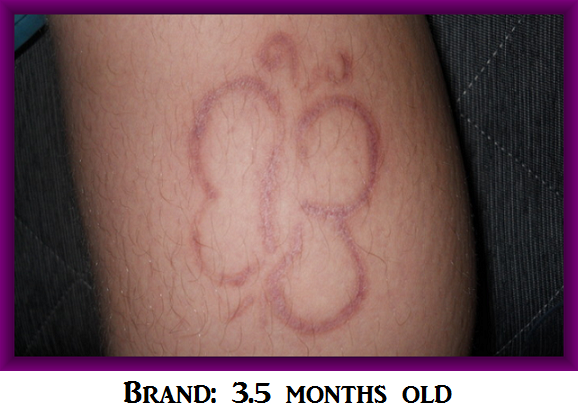 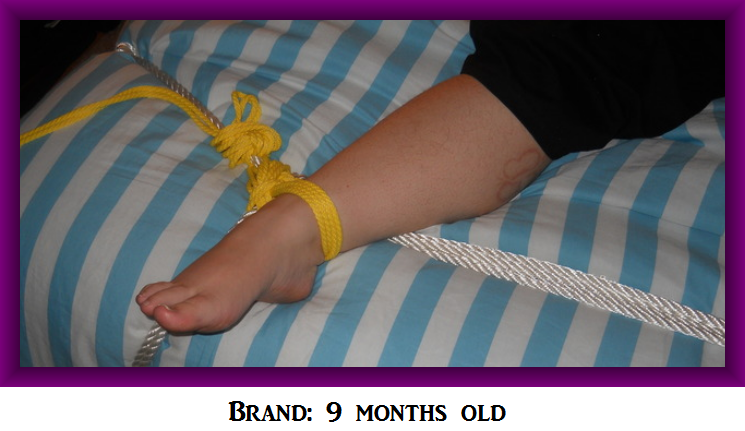 What a beautiful way of honoring your relationship. While I've never been branded I have several tats and designed the combined family crest that represented the joining of my life with my DH and had it inked on to my left calf.

@Dakota - Thank you! It's funny, I've yet to get a tattoo. And the calf seems to be an interesting spot to put bonding marks. These marks are so important and meaningful! Yours sounds like a lovely way to honor the coming together of your families. :)

I have never read about branding, so found this interesting! Reading it I was thinking 'it sounds like that would hurt', then I realised I have five tattoos ;) We have matching tattoos and think there is something really special about it!